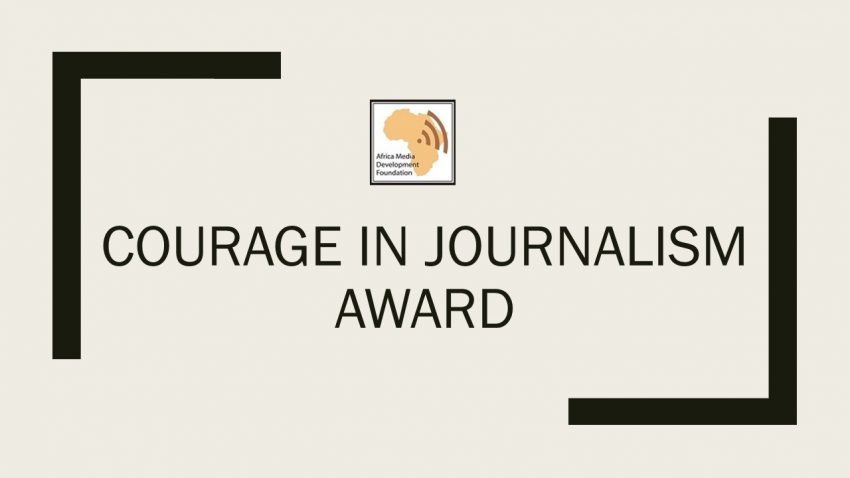 The Board of Africa Media Development Foundation (AMDF) will honour Gambian Journalist, Ndey Tapha Sosseh and Radio Erena with its 2020 Courage in Journalism Awards.

The Courage in Journalism Award is presented by the AMDF Board to an African Journalist, and a media organisation that demonstrated bravery and perseverance in the course of their journalism work.

The recipients of the Award is decided by the Board on who merits it, after careful research from a pool of qualified journalists.

Chairman of the AMDF Board, Dr. Yila Umaru said, “after painstakingly assessing the works and experiences of African journalists and media stations, the Board has concluded that these two should be presented with the awards.”

The award will be presented virtually on 13th October, 2020, during the 2nd Bagauda Kaltho Memorial Media Lecture.

Ndey Tapha Sosseh of The Gambia began her career in journalism in June 1998 as a reporter with the Daily Observer of Gambia and later became the editor.

From 2000 to June 2004, Ndey was in the UK for further training, where she studied at the University of Central England in Birmingham and obtained her Masters in International Press Journalism.

From April to December 2005, she worked for the Medical Research Council and subsequently for the Association of Development Consultants.

At the end of March 2005, Sosseh was elected General Secretary of the Gambia Press Union (GPU) and in March 2008, she became the President of the Union.

In 2009, while Ndey was on a trip to Mali, former President Yahya Jammeh granted an interview to the GRST in which he used disparaging remarks against the slain country’s most prominent reporter and editor, Deyda Hydara of The Point newspaper, who was murdered in 2004.

As president of The Gambian Press Union, Ndey condemned comments by Jammeh against the slain journalist.

The Journalists Union suspected Mr. Jammeh of being behind the unsolved slaying and continued to demand an apology for what they called insensitive remarks on the case.

She later wrote a letter on behalf of the Gambia Press Union condemning the remarks of the ex- President Jammeh.

This letter didn’t go well with Jammeh which led him to order the arrest of seven Gambian journalists.

She then wrote series of letters to International Organizations like African Union and Economic Community of West African States including media affiliated bodies in exposing human rights violations by Jammeh’s government on Gambians, especially journalists.

She also questioned the grounds for the media crackdown, which comes shortly after the GPU sought a presidential apology.

While Ndey remained in Mali, she continued to issue statements on behalf of her arrested colleagues, five of whom were officials and members of the GPU, without fear of the reprisals faced by her fellow scribes.

From June 2009 to October 2017 she remained in Bamako (Mali) having been charged alongside others with treason in The Gambia in 2011, under the “Conspiracy to commit treason and seditious act”.

The Gambian government under Foreign Minister, Mamadou Tangara allegedly wanted to have her extradited to Gambia.

But, the International Federation of Journalists hired personal protection around the clock to protect her.

After Yahya Jammeh was voted out of the Gambia presidential election in 2016, she returned to her country in 2017.

In July 2019, she testified before the Truth, Reconciliation and Reparations Commission (TRRC).

She continues her journalism and communication work.

Radio Erena was founded in 2009 by an Eritrean, Biniam Simon, who worked for 14 years for the government television station ERi-TV based in his country’s capital, Asmara.

He travelled to Japan in 2007 for a workshop on video production. Fearing repression at home, he sought for asylum in Japan, but was refused, he then made his way to France.

After being granted asylum in France in January 2007, he had the idea of founding a media organization to act as a link between the people of Eritrea and the rest of the world, since Eritrea’s dictatorial government ensures that the country is isolated and people are deprived of access to information.

After about a year of fundraising to get the station up and running, he found financial support, as well as an office for the station, which uses satellite, the internet and a mobile app to broadcast in Eritrea, where it is the only independent radio station.

Despite media crackdown, persecution of journalists and punishing family members of perceived enemies, Eritrean journalists volunteered to work with the radio station.

Reporters Without Borders (RSF), has helped Biniam Simon to seek asylum in France and supported Radio Erena at every step.

Radio Erena quickly built up an audience of Eritreans inside and outside the country. Biniam was soon joined by another journalist and, as the serious nature of their work and their fight for freedom of expression and access to information became clear, other journalists – sometimes under pseudonyms — began working with them.

Radio Erena is based in Paris where 4 journalists are working full time to prepare the news and programmes for the radio. They are supported by 15 correspondents based in 7 countries.

Since 2014, the radio also broadcasts a programme in Arabic three times a week, presented by Fathi Osman, a former diplomat.

The station stopped working for three weeks in August 2012 after its satellite dropped the station and its website was hacked. The attack was traced back to an Eritrean location.

Regardless of continued attack by the Eritrean government, Radio Erena has maintained balanced news coverage.

It is worthy to note that Eritrea has independent press since September 2001, all independent newspapers were closed down and their publishers and editors were arrested on the orders of President Issaias Afeworki.

Citizens can only access news through the government owned and controlled media – Eri-TV, Radio Dimtsi Hafash and the government daily Hadas Eritrea.

Eritrea is ranked as the worst country in Africa on Reporters Without Borders index, which measures the degree of respect for press freedom